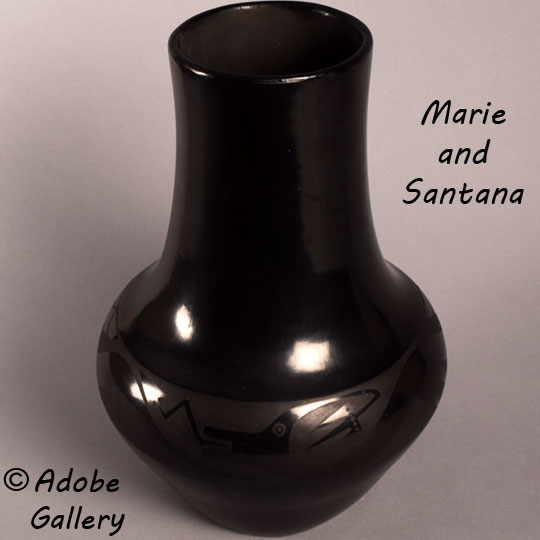 This tall black-on-black jar was created by Maria and Santana Martinez of San Ildefonso Pueblo. The jar stands nearly fourteen inches tall, with a tall neck that dips gently inward before turning outward slightly at its rim. Its lower section is wide and rounded, forming a strong base for the tall neck. The jar was designed for use as a lamp—likely in the 50s or 60s, when this was common practice—but does not appear to have been used as such.  The is a small hole near the base for the electric wire but it is not obtrusive.

A single design band featuring an Avanyu water serpent circles the jar’s widest point. A dot set within a slightly larger circle forms a single piercing eye. As is typical of pieces featuring this design, rain clouds appear in the areas in which the serpent’s body dips downward. The jar displays a smooth, consistent polish, inviting interaction with the viewer and any sources of light nearby. This is a fine example of Maria and Santana’s collaborative work. San Ildefonso Pueblo artist Maria Martinez (1887-1980) Poveka is probably the most famous of all pueblo potters. She and her husband Julian discovered in 1918 how to produce the now-famous black-on-black pottery, and they spent the remainder of their careers perfecting and producing it for museums and collectors worldwide.  Martinez’ daughter-in-law Santana (1909-2002) painted designs on the famous pueblo matriarch’s pottery.  Though best known for her work with the famous family into which she married, Santana came from a long line of talented painters and potters. Her grandmother, Dominguita Pino Martinez, was a famous potter and her brother, Awa Tsireh, was a famous painter.

Condition: good condition, with a hole near the base if the jar were to be used as a lamp, and a few small scratches and abrasions