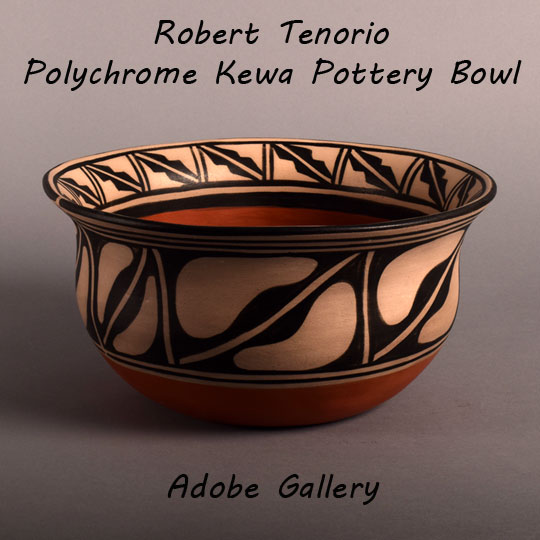 This polychrome pottery bowl was created by Robert Tenorio of Kewa Pueblo.  It features strong, attractive designs on both its interior and its exterior.  On its exterior, a wide design band circles the bowl, repeating one traditional design element with slight variations in size and shape.  A ceremonial break splits the band vertically, ultimately reaching up and over the rim before continuing through the interior design band.

The interior band also uses a single repeating design.  It’s smaller than the exterior band, and uses a sort of stretched-out Kiva step pattern instead of the exterior’s rounded element.  A thick line of black pigment separates this band from the rest of the interior, which is covered in the same bright red slip that appears on the exterior’s bottom.  With this beautiful bowl, Tenorio presents traditional Kewa designs on a vessel with a clean, contemporary look.

Tenorio inscribed his name and a star pattern near the bottom of the bowl.  On the bottom, he inscribed “Santo Domingo Pueblo N.M.”

Robert Tenorio (1950- ) is a Kewa Pueblo artist. Tenorio began his artistic career as a jeweler before moving into pottery making. At first, he created stoneware, and then he transitioned to traditional methods and materials.  Tenorio has evolved into one of the most significant Pueblo potters of today, creating works that have an attractively modern look while being made with ancestral designs and natural materials.  He has received many notable awards and accolades for his work.