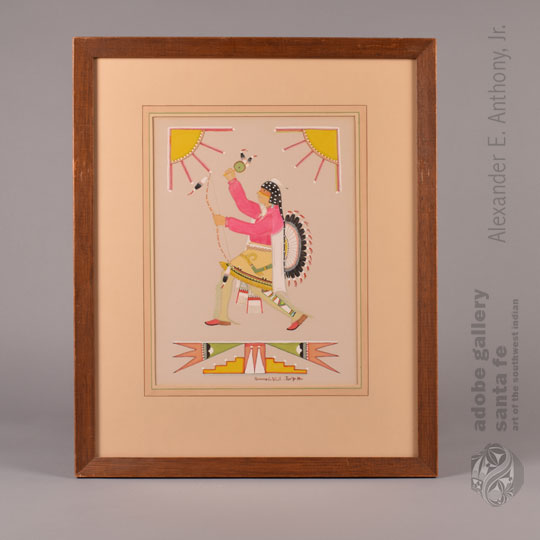 Romando Vigil was one of the San Ildefonso self-taught artists in the early part of the 20th century. He was a leader within the San Ildefonso Watercolor Movement, a movement that caught fire during 1915 to 1917. It fostered an art form unmatched in the cultural history of the world. These men portrayed tribal culture and local wildlife, attaining a flat decorative character, absent of backgrounds and foregrounds, and free of traditional perspective, with an unerring color sense. Their success in these presentations was due to their understanding the ceremonials they painted because they had participated in them since childhood. They understood the meanings of the symbolism they interpreted.

According to a client who knew and worked with Vigil, the bright pink suggests that this painting of a Sun Dancer was most likely executed after he moved to California.  The white dots in the dancer's hair symbolize snow.  The dancer is asking for the sun to come melt the snow.  The huge feather bustle on the dancer has a sun face painted at its center.  Eagle down feather is attached to the hair of the dancer.  The bow is his symbol as a hunter.

Condition:  this San Ildefonso Pueblo Painting of Sun Dancer Hunter by Tse Ye Mu appears to be in original condition but has not been examined out of the frame.