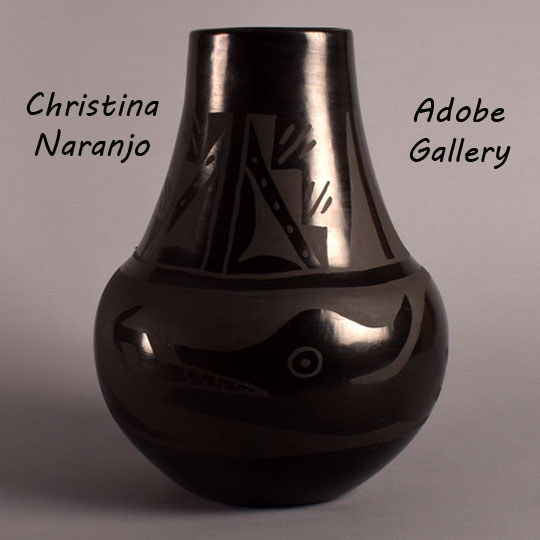 This large black carved pottery vase was created by Santa Clara Pueblo artist Christina Naranjo.  Most of Naranjo’s works that have passed through Adobe Gallery are carved blackware—the style most commonly practiced at Santa Clara.  This large vase is completed in the black-on-black style mostly associated with San Ildefonso Pueblo.  This vase and the other pieces we’ve seen from Naranjo prove that she was a skilled and versatile artist who worked successfully with either of these two well-known styles.

This tall, wide vase looks and feels substantial.  Its primary design band features an Avanyu that has been scaled up to suit the size of the vase.  It is wide and expressive, with a wonderful head and a long, winding tail that circles the entire jar.  Above this band, kiva step designs climb from the shoulder up the tall neck.  Additional designs live within and around the kiva steps.  All the design work here is lively, energetic, and unique; each element suits the vessel perfectly.  This is a unique and beautiful work from a significant Santa Clara Pueblo artist.

The bottom of the jar is signed Christina Naranjo.

Christina Naranjo (1892-1980) was the daughter of Sara Fina & Geronimo Tafoya, and the sister of Margaret and Camilio Tafoya.  She was the mother of Teresita Naranjo and Mary Cain, and the great-grandmother of Tammy Garcia and Autumn Borts-Medlock. Like her family members, Naranjo used traditional methods and native clay to create polished blackware.  Her works are included in museum collections around the country.

Condition: good condition with a few abrasions and scratches, mostly around the rim and the jar’s widest point. No chips or cracks.

Provenance: this Santa Clara Pueblo Large Black-on-Black Avanyu Vase by Christina Naranjo is from the collection of a gentleman from Colorado