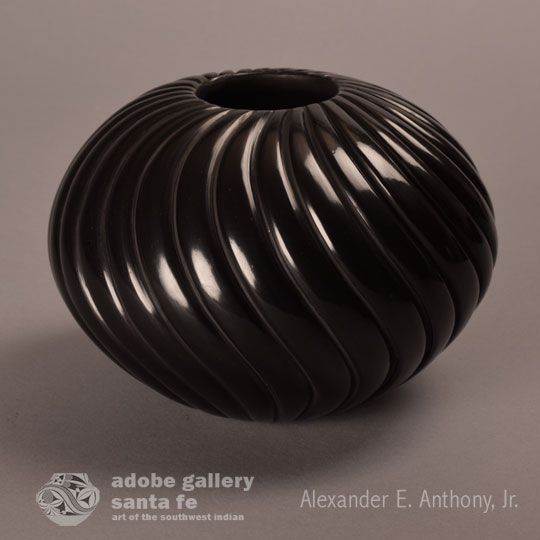 This polished blackware melon jar was created by the hands of an outstanding potter: Linda Tafoya-Sanchez.  Its shape is lovely—round, wide, with a small opening at the top. The polish is excellent, as is to be expected of a Tafoya-Sanchez jar.  Its surface is smooth, even, and reflective; it’s as close to perfect as one could expect of a handmade item. While its shape and polish are strong, it is the manner in which the ribs are arranged that is the jar’s most striking attribute.  They’re S-shaped, with the center of the “S” intersecting with the jar’s widest point. Each rib is identical in size and shape. They curve down from the rim and grow wider, then curve again and become thinner towards the jar’s bottom. The carved areas grow deeper as they reach the middle, and then become shallow again at their ends.  Like the ribs—which they create, really—they are consistent in size, shape and depth through the entirety of the piece. Tafoya-Sanchez did an excellent job with this melon jar.

Linda Tafoya Sanchez (1962-) of Santa Clara Pueblo is known to some collectors by a previous married name: Linda Tafoya Oyenque.  She is a daughter of Lee and Betty Tafoya, and a granddaughter of Margaret Tafoya. She credits her aunt Mary Ester Archuleta for training her to be a potter. Linda has branched out from creating traditional burnished blackware with simple carved designs and expressed a great deal of creativity.  She mixes burnished black with matte black, and has introduced use of micaceous clay in the mixture. Linda is a highly decorated artist whose awards are too numerous to mention here, but a couple honors certainly deserve pointing out. She has earned awards at the Santa Fe Indian Market, the Heard Museum and several other major exhibitions. One of her notable accolades is her appointment to create a piece for presentation to the Prince of Spain.