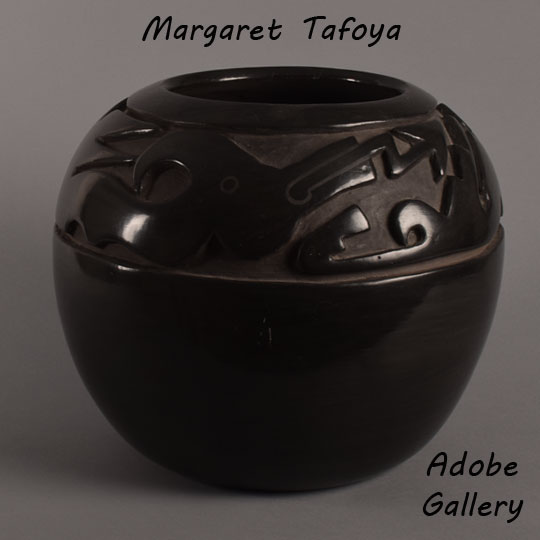 This carved black pottery jar was created by influential Santa Clara Pueblo potter Margaret Tafoya.  It’s a large, impressive piece with an atypical shape. It’s similar, in ways, to the large globular pieces we see more frequently, but its underbody does not curve inward in a circular manner. Instead, it slopes gently inward toward a wide, flat bottom.  We see this shape used more frequently with jars that are significantly smaller. The shape works well here—the jar has a powerful presence. It’s fairly heavy, and its walls are thick. It feels, in every way, like a substantial piece.

Its upper half features a single design band.  The design band features an Avanyu, a typical Tewa Pueblo motif.  This Avanyu, with its expressive face and wild body, is particularly animated.  When viewing the piece, one gets the sense that the artist was really enjoying herself during its creation.  Its strong shape and lively design pattern work well together. The polish, of course, is outstanding. It’s smooth, reflective, and even all around the jar’s substantial surface.  The carved patterns are deep and consistent. Tafoya’s work here is of her typical exceptional quality.

Margaret Tafoya (1904 - 2001) Maria Margarita Tafoya - Corn Blossom was one of the most famous and influential Pueblo Indian artists.  Tafoya was born August 13, 1904 at Santa Clara Pueblo. She learned her skills from her parents, Sara Fina Gutierrez Tafoya and Jose Geronimo Tafoya, who were expert potters; some of her pieces are inspired by tales she heard from her parents and grandparents. Margaret and her mother were known for their ability to make unusually large storage jars and water jars. Tafoya believed the secret to her success was her polishing stones, which have been passed down through the generations. She taught her pottery making skills to many of her nine children, including Virginia Ebelacker, Mela Youngblood, Toni Roller, LuAnn Tafoya, and Mary Esther Archuleta.  In 1985, Margaret Tafoya was one of three New Mexicans selected to receive the Governor's Award, New Mexico's highest artistic honor. This award is given for a major contribution to the arts of New Mexico. Tafoya passed away in 2001.

Condition: Good condition, with minor abrasions in a few areas around the top and a small chip in one of the raised design’s corners.  We can arrange for these issues to be repaired should the buyer wish to do so.

Recommended Reading: Born of Fire: The Pottery of Margaret Tafoya by Charles King.