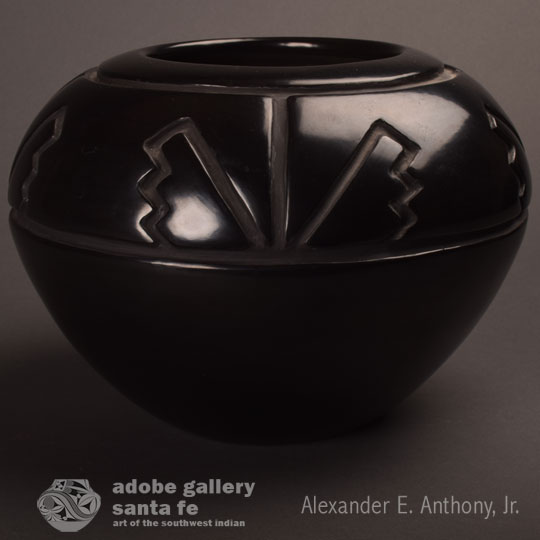 Santa Clara Pueblo matriarch Margaret Tafoya is admired for her many beautiful very large and somewhat smaller black, highly-polished, and beautifully carved jars. This jar is as fine as any she ever made. It is globular in shape with a carved design of stepped elements on the shoulder above a beautiful burnished lower body that has no carvings.

It is the subtle and sparse design that elevates this jar to magnificence.  Stepped designs face each other in four separate panels, just enough design to add an appeal of elegance to the shape.  Margaret Tafoya (1904 - 2001) was a master at forming vessels, burnishing them to a beautiful luster, and selecting just the correct amount of carving to catch one’s eye.

It is not overstating to say that this is one of her masterpieces.  This vessel is signed by the artist.

Provenance: from the collection of a gentleman from Northern New Mexico

Recommended Reading: Born of Fire: The Pottery of Margaret Tafoya by Charles King