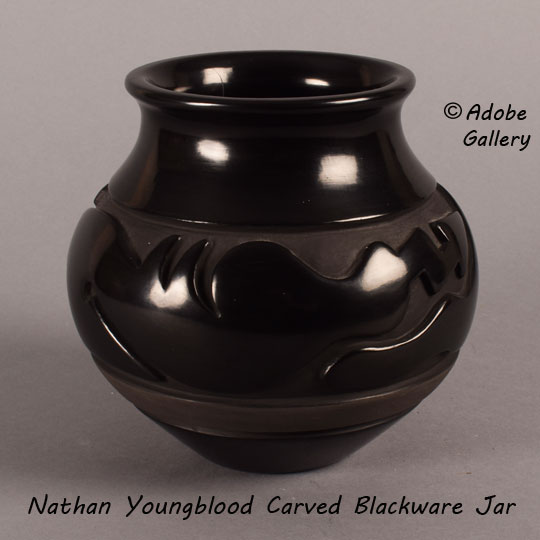 This exquisite blackware bowl was created by Nathan Youngblood of Santa Clara Pueblo. Youngblood is a modern master of pottery design, making pieces in a variety of innovative styles using traditional methods and materials. Technical perfection is apparent in every piece he signs, and this blackware jar is no exception. With this piece, Youngblood offers a traditional form and design with a few subtle enhancements. Modernized, personalized expressions appear, but they are subtle and tasteful.

The vessel takes a pleasantly rounded form, with a flat base, curved neck, and flared rim. The primary design is a beautifully abstracted avanyu, which incorporates a variety of geometric forms and traditional design elements. A matte-finished band appears just below the avanyu, circling the jar just below its widest point. The surface is remarkably beautiful, with a smooth, glassy look appearing as the result of careful and thorough stone polishing. This is an exceptional example of contemporary Santa Clara pottery.

The bottom of the bowl is signed Nathan Youngblood with is hallmark of deer tracks.

Nathan Youngblood (1954- ) Deer Path is an outstanding artist from a family of many outstanding potters. He is the grandson of Margaret Tafoya and son of Mela Youngblood. His sister is Nancy Youngblood. Youngblood is known for his creative designs and technical precision. His burnishing is very fine, and he finely sands the edges of his carved designs. Like his grandmother, he believes in the importance of traditional firing one pot at a time, thus greatly diminishing the chance of damage to pottery that may have taken 300 to 400 hours of preparation.

Youngblood has served on the Board of Directors of the Wheelwright Museum in Santa Fe, and volunteered his time at the annual Wheelwright auction. He has also served on the boards for the Gallup Inter-tribal Indian Ceremonial and the Southwestern Association of Indian Arts, the producer of Santa Fe Indian Market. He has been a board member of the American Crafts Council in New York, on the advisory board for the Scottsdale Center for the Arts, and the School for Advanced Research in Santa Fe. He has lectured at the Smithsonian American Art Museum in Washington, D.C., the Denver Museum of Natural History, and Museum of Indian Arts and Culture in Santa Fe as well as numerous other venues.

Provenance: this Santa Clara Pueblo Carved Blackware Jar by Nathan Youngblood was purchased in 1990 by a West Coast collector who is now downsizing