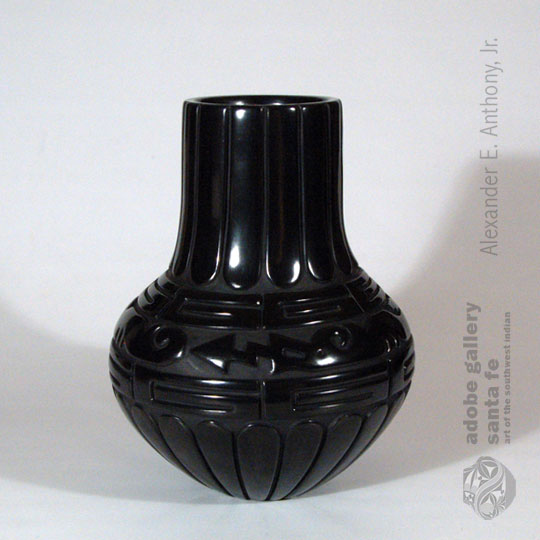 There isn't a square inch on this jar without design.  Linda Tafoya-Sanchez divided the design concept into five different bands.  Starting from the top of the vessel, the stove-pipe neck is filled with fourteen vertical and parallel polished bars, each separated by a thin matte line.  The next panel of design consists of Greek-key elements encircling the lower neck. On the shoulder is an Avanyu, or wtaer serpent, wrapped around to the point where the tail meets the mouth, from which a lightning bolt extends.  At the midbody of the jar is a series of Greek-key elements. The final panel, below mid-body, is a series of feathers that extend to the base of the jar. Each of these designs is highly polished to perfection. 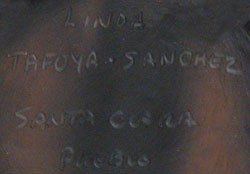 Linda Tafoya formerly signed her pottery Linda Tafoya Oyenque, now she signs as Linda Tafoya-Sanchez.  Same person, same beautiful pottery. She is a daughter of Lee and Betty Tafoya and granddaughter of Margaret Tafoya.  She credits her aunt Mary Esther Archuleta for training her to be a potter. Sara Fina Tafoya seems to have set the standard for members of her family and their output of black pottery.  All the family members produce magnificent pottery.

This is an amazing jar with an enormously beautiful design concept and execution. The artist demonstrated her mastery of the process.