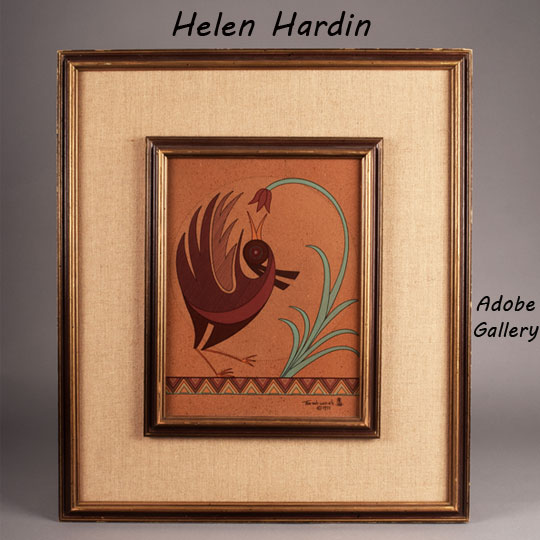 This wonderful original painting was created by influential Santa Clara Pueblo artist Helen Hardin.  Though we’ve studied countless Hardin paintings over the years, we continue to be impressed by her style and versatility.  With this image, she used one of her preferred formats: acrylic paintings of animals, accented by geometric patterns and other abstract imagery.  What’s incredible about Hardin is that she found so many unique ways to express herself while working within this format.  This particular image is one of the strongest we’ve seen.

Hardin’s subjects here are a bird and a flower.   The bird is composed in a particularly creative manner.  Its head is a series of increasingly large circles set around the same point.  Strong central circles in maroon and blue signify its eye.  Two lines extend outward from the circle’s right side, creating the graceful spiral that forms the bird’s body and wings.  Its beak extends up toward the flower, which curves down toward the bird.  The flower’s long blue stem curves gently, forming a shape that matches and complements the bird’s curved body.  The bird and flower stand atop a line made of colorful triangles.  Hardin’s excellent compositional skills are on full display here.  Her color choices—beautiful gold tones, rich maroons, and a nice light blue—serve the image perfectly.  The painting is dated 1977, but it appears as if it could have been painted yesterday.  This is due to its excellent condition, the artist’s forward-thinking style, and a color scheme that is strong but tasteful.  This is a fine example of Helen Hardin’s work.

The painting is signed Tsa-Sah-Wee-Eh and dated 1977 in lower right.  It is framed in one of the original frames seen frequently with Hardin’s works from this time period.

Helen Hardin (1943-1984) Tsa-Sah-Wee-Eh or “Little Standing Spruce” was an innovative and influential painter from New Mexico’s Santa Clara Pueblo.  Hardin was born in 1943 to Santa Clara Pueblo painter Pablita Velarde and Caucasian civil servant Herbert Hardin. Inspired by her mother, she began creating and selling paintings as a teenager.  She went in a different direction than her mother and her mother’s peers, creating more contemporary works that depict Native American symbology with striking geometrical patterns and abstract imagery.

Hardin's distinctive and compelling style became more fully realized in the 1970s, with a series of paintings of Katsina figures. These and her later works are immensely complex works of art that have been displayed in museums around the world.   Her personal explorations led her into the deeply affecting works of the very well-known “Woman” Series. Much of her work is concerned with the intellectual and physical struggle of her very existence—the struggle of woman versus man, patron versus artist, Indian versus Anglo, tradition versus progression.  Her art is complex and beautiful, at once forward-thinking and firmly rooted in ancient tradition. Hardin was a truly intriguing woman and one of the preeminent American Indian painters of the twentieth century. She died of cancer in 1984, leaving behind her an astounding body of work for her many admirers to enjoy.

Provenance: this Original Painting of a Bird and a Flower by Helen Hardin is from a private Tennessee collection