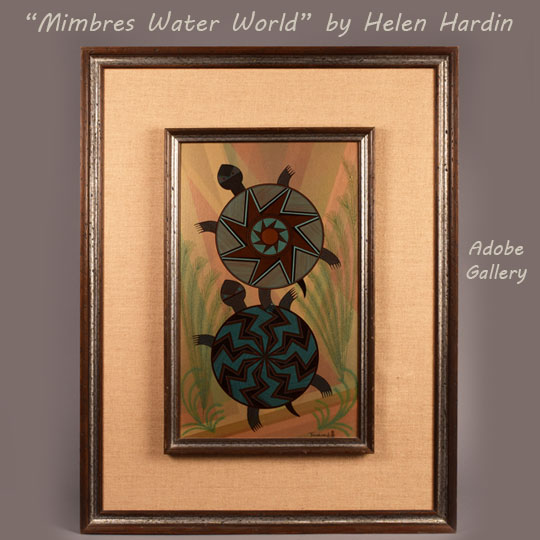 “Mimbres Water World” is an original painting by influential Santa Clara Pueblo painter Helen Hardin.  The painting’s year of completion is 1981, which places it late in the artist’s career.  Hardin’s experience is evident in the painting’s graceful composition, which places two large Mimbres-inspired turtles within an environment that combines natural elements and dreamy abstraction.  Hardin created many images in this style, using Mimbres animal designs as her primary subjects while satisfying her experimental inclinations in their details and surroundings.  “Mimbres Water World” is one of the finest works we’ve seen in this style.

Hardin’s two turtles are identically sized and identically positioned.  Their shells, however, are adorned with different designs and different colors.  The upper turtle’s shell has a design that might best be described as a spiraling star. A smaller variation appears around a circle in its center, creating a sun design.  The lower turtle’s incredible shell design looks like a series of lightning bolts striking inward simultaneously to a central point.  These designs’ gorgeous color schemes—rich green, red, turquoise, and gold tones—vary quite a bit from those of the natural elements they reference.  Hardin made decisions like this often, skillfully and confidently modifying the world around her to fulfill her artistic vision.  Note the intricate, colorful patterns with which she completed the turtles’ legs and heads—this is not something to be found in the natural world, but it still seems to suit the creatures perfectly.  The environment in which they swim utilizes a similar approach, placing straightforward depictions of plants over abstracted blocks of color in a variety of earthy tan and brown tones.  “Mimbres Water World” is an exceptional example of Helen Hardin’s work.

The painting is signed Tsa-Sah-Wee-Eh and dated 1981 in lower right.  It is signed and titled on verso.  It is in the original frame, which uses a wide fabric mat and an interior frame to create a large and impressive presentation.

Helen Hardin (1943-1984) Tsa-Sah-Wee-Eh or “Little Standing Spruce” was an innovative and influential painter from New Mexico’s Santa Clara Pueblo.  Hardin was born in 1943 to Santa Clara Pueblo painter Pablita Velarde and Caucasian civil servant Herbert Hardin. Inspired by her mother, she began creating and selling paintings as a teenager.  She went in a different direction than her mother and her mother’s peers, creating more contemporary works that depict Native American symbology with striking geometrical patterns and abstract imagery. She died of cancer in 1984, leaving behind her an astounding body of work for her many admirers to enjoy.

Provenance: this Santa Clara Pueblo Painting "Mimbres Water World" by Helen Hardin is from the collection of a resident of Texas