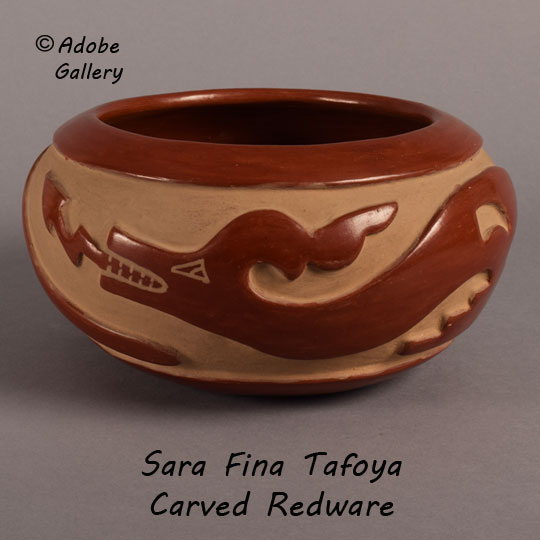 This carved redware bowl was made by Santa Clara matriarch Sara Fina Tafoya, likely in collaboration with one or both of her children, Margaret Tafoya and Manual Tafoya. Tafoya's granddaughter Toni Roller examined the bowl and confirmed that the bowl was made by Sara Fina. She noted that the polished interior and the style of the avanyu design both looked like Margaret's work, but it might have been done by Manuel. She also noted that the signature—Serefina, Santa Clara inscribed into the clay before firing—would have been added by a family member as well, because Sara Fina could not write.

This Tafoya family piece dates to the 1920s or 1930s. The carved designs form an Avanyu, which itself incorporates a variety of design motifs. A matte tan tone fills in the carved areas and appears over the red slip to form a painted eye and mouth. The interior is polished beautifully, and the piece as a whole is rich in beauty.

The bottom of the bowl is signed Serefina, Santa Clara.

Sara Fina Tafoya (circa 1863-1950) Autumn Leaf was one of the most famous nineteenth-century Santa Clara Pueblo potters. Tafoya married Geronimo Tafoya and had eight children, a group that included Margaret Tafoya. Sara Fina was an exceptional potter from about 1880 to 1950, making large, magnificent pottery jars, some more than three feet tall. Because she lived and worked into the first half of the twentieth century, her name is familiar to collectors today and her pottery is easily recognizable. Tafoya's works are included in many major public and private collections.

What is an Avanyu? it is a deity of the Tewa Pueblos—San Ildefonso, Tesuque, San Juan, Santa Clara, Nambe, and Pojoaque—and is the guardian of water. He is represented as a horned or plumed serpent with curves suggestive of flowing water or the zig-zag of lightning. He appears on the walls of caves located high above canyon rivers in New Mexico and Arizona and may be related to the feathered serpent of Mesoamerica— Quetzalcoatl and related deities.