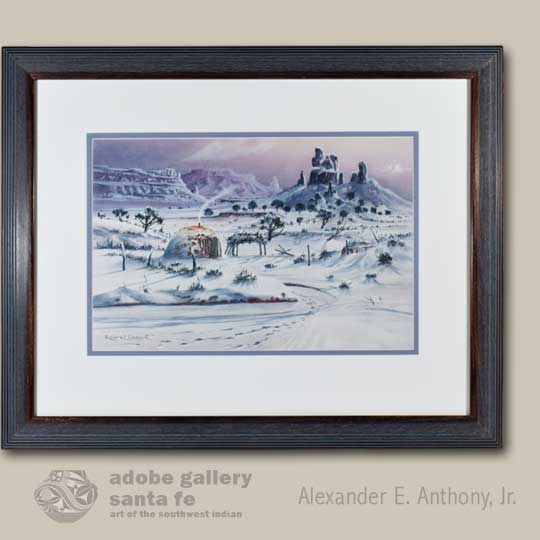 This untitled painting serves as an excellent example of Robert Draper doing what he did best: recreating the natural beauty of the sprawling Navajo Reservation.  It’s a winter scene—something Draper excelled at—that was created with admirable care and sensitivity. Most immediately impressive is the sense of depth portrayed by the piece.  In the foreground, multiple pairs of footsteps lead away from the viewer, around a corner, and to the doorway of a hogan. Next to the hogan is a simple shelter made of logs and branches.  In better weather, this shelter would be used for weaving or food preparation. Here, it is understandably unoccupied. Behind this realistic Navajo dwelling, the viewer is treated to a gorgeous depiction of the Arizona hills and mesas that surrounded the artist for the majority of his life.

Navajo artist Robert Draper (1938-2000) was born with the name Robert Martin (son of Janet Descheeny, Navajo, and Frank Martin, Hopi - Laguna) in Chinle, Arizona.  From the age of two, he lived with his grandparents who raised him. He was given their surname of Draper when he entered school at the age of eight. He attended Chinle Boarding School on the Navajo Reservation, Inter-Mountain Indian School in Utah for four years, and the Institute of American Indian Arts in Santa Fe. He served a tour of duty in the U.S. Marine Corps.  Draper strayed from the two-dimensional style of painting that was favored by his peers, instead focusing on painting in a more European style. He is best known for his realistic scenes of the Navajo Reservation’s beautiful landscape.

The peaks nearest to the viewer are sharp and vivid, composed of detailed brushstrokes and boldly contrasting colors.  The peak that is furthest from the viewer is loosely defined, using wider brushstrokes and colors that blend and bleed into one another. The sky, too, is notably appealing in this charming image.  Its foggy pinks and purples create an accurate representation of the dreamlike half-light that washes over Southwestern hills immediately before sunrise or after sunset. A close study of the painting reveals that the artist created this immersive image using combinations of just a few distinctive colors.  Draper’s skillful and truthful depiction of this potentially challenging scene will delight anyone who appreciates unique Southwestern landscapes.

The painting is signed by the artist in its lower left corner.

Condition: this Untitled Painting of a Navajo Nation Winter Scene by Robert Draper is in original condition

Provenance: from the collection of a Colorado resident who purchased it from a Colorado gallery in the mid 1990s. 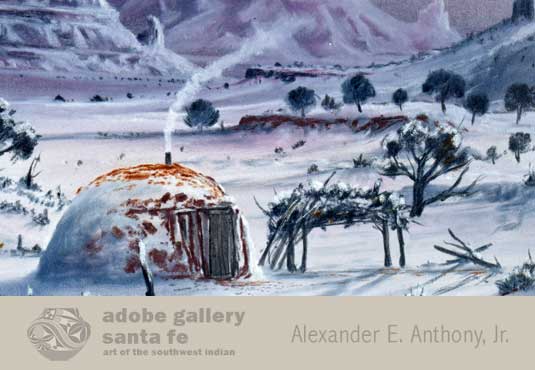 Selected Works of THE EUGENE B. ADKINS COLLECTION
by Author Unknown