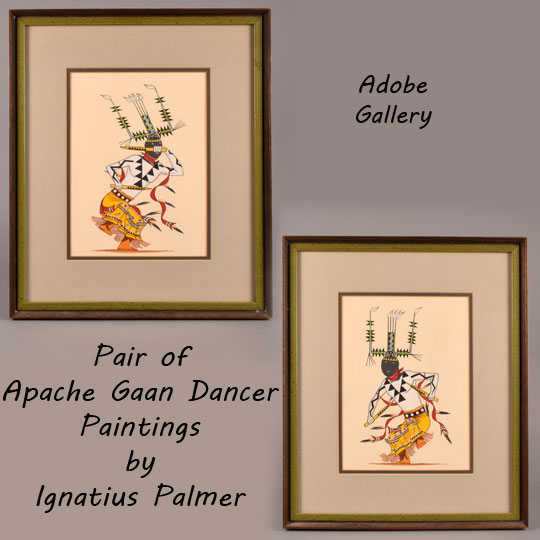 This pair of paintings of Apache Mountain Spirit or Gaan dancers was created by Ignatius Palmer.  The Mescalero Apache artist was a Santa Fe Indian School student, and his works clearly reflect that well-documented style.  There is no background, and just a small line signifying the ground.  Ceremonial dancers were his preferred subjects. This matched pair of paintings—identical in size and framed identically—is a fine example of his work.

Each painting features a single Apache Gaan dancer, completed using Palmer’s version of the style commonly associated with the Santa Fe Indian School.  Palmer’s dancers are of exceptionally high quality.  Their movements are dynamic, and their coloration is bold and eye-catching. Yellow, red, and green tones were applied sparingly, but still manage to make a strong impact. These brighter colors work perfectly alongside the black and white used for the dancers’ masks and body paint.  It is evident that careful attention was paid to the intricacies of each dancers’ clothing and paraphernalia.  Those who are familiar with the works of the great Allan Houser will notice some similarities between these two Apache artists’ works, particularly in the brilliantly animated movements of the figures.

Each painting is signed Palmer and dated “‘72” in lower right.  They are framed identically, under gray matting, in carved wood frames with green interior bands.

Ignatius Palmer (1922 - 1985) was a Mescalero Apache artist. Jamake Highwater’s Song from the Earth: American Indian Painting names Palmer as one of the most talented early Apache painters:  “The two most impressive Apache artists to attend The Studio (Santa Fe Indian School) were Ignatius Palmer and Allan Houser.  Palmer possessed a distinctive sense of line and produced angular figures in a background of serenity.  The figures in his paintings seem caught in the midst of an action, still alive and warm.”  Palmer served in the U. S. Army Air Corps in World War II, after which he painted and worked in construction.

The famous Santa Fe architect, John Gaw Meem, designed a building in downtown Albuquerque for Maurice Maisel’s new trading post and asked Olive Rush to paint murals at the entrance.  She suggested she select Indian artists to paint them.  All selected were from The Studio of the Santa Fe Indian School.  They were Awa Tsireh; Popovi Da and Pop Chalee, who painted northern Pueblo subjects; Ben Quintana, Ku-Pe-Ru, and Joe Herrera painted Keres motifs; Wilson Dewey and Ignatius Palmer added some of the Apache patterns; and Ha-So De and Harrison Begay contributed Navajo ones.  Palmer painted a Gaan Dancer.  The murals still exist on the building.

Provenance:  this Pair of Apache Gaan Dancer Paintings by Ignatius Palmer is from the large collection of an Albuquerque family

- Song from the Earth: American Indian Painting by Jamake Highwater RARE “Indian Dances” and Their Meaning [SOLD]
by

THE MEDICINE-MEN OF THE APACHE [SOLD]
by John Gregory Bourke, Captain, Third Cavalry, U. S. Army

SKY DETERMINES an Interpretation of the Southwest [SOLD]
by Rev. Ross Calvin