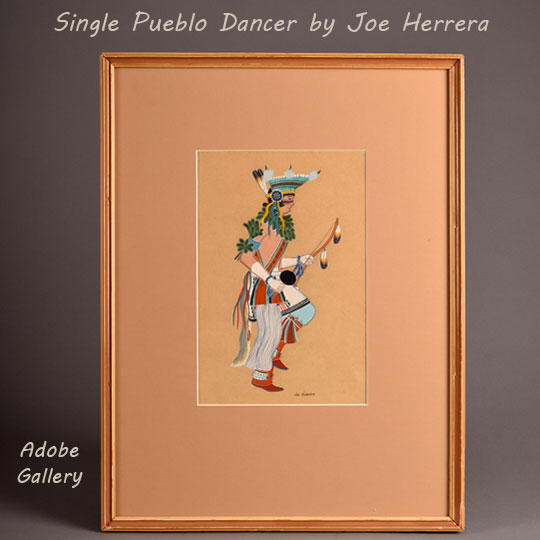 This fine painting of a single Pueblo dancer was created by Joe Herrera of Cochiti Pueblo. Hererra’s earlier works were strongly influenced by those of his mother, Tonita Peña of San Ildefonso Pueblo.  Later in his life and career, he moved away from the traditional style in favor of exploring abstraction and modernism.  This shift in style has been credited to the influence of Raymond Jonson, who taught Herrera at the University of New Mexico.  Herrera is recognized as one of the first pueblo painters to explore the aforementioned styles.  This piece, however, is a classic “flat style” pueblo painting, and it’s an excellent example.

Herrera’s pueblo dancer is depicted from top to bottom in incredibly fine detail. Careful outlines, smooth and consistent throughout, define the dancer’s body.  These lines are filled in with a remarkable array of bright colors.  Fortunately, these beautiful bold tones do not appear to have faded over the years.  The dancer’s clothing and paraphernalia appear here just as they would at the actual ceremony.  Notice the subtle shading around the dancer’s arms and legs, and the carefully textured feathers—this is remarkable work that deserves a close study.  This is a wonderful example of Joe Herrera’s ability to create excellent traditional Pueblo images.

The painting is signed Joe Herrera in lower right.  It is framed under acrylic and a wide tan mat.  We replaced the original matting and backing with archival materials but kept the charming original frame.

Joe Hilario Herrera (1923-2001) See Ru was an innovative and successful Native American painter.  His father was from Cochiti Pueblo, and his mother—pioneering painter Tonita Vigil Peña (1893-1949) Quah Ah—from San Ildefonso.  Though his artistic inheritance and early art education came from his mother, Herrera is from Cochiti pueblo. He attended the Santa Fe Indian School, served in the US Army during World War II, worked at the Laboratory of Anthropology, and completed a degree in art education at the University of New Mexico.

In her book Southwest Indian Painting: A Changing Art, Clara Lee Tanner describes Herrera’s innovative style: “In the mid-1950s, Herrera developed a style which was encouraging for the future of Indian painting. The rich design—lore of the past and much that is prevalent in religious forms today he combined into abstract painting.  Again it is the clever manipulation of the age-old and omnipresent themes—sun, moon, clouds, rain, lightning, kachinas, birds, the sacred serpent. . . The end product is essentially Indian; it is also modern, for abstract art is preoccupied with form and color and pattern.”  Dorothy Dunn’s American Indian Painting of the Southwest and Plains Areas states that he “did justice to a fine tradition in his authentically drawn ceremonial subjects.  His work was unlike that of his renowned mother, Quah Ah, for his was coolly decorative where hers was warmly natural.”

Provenance: this Original Cochiti Pueblo Painting of Single Pueblo Dancer by Joe Herrera is from a private collection