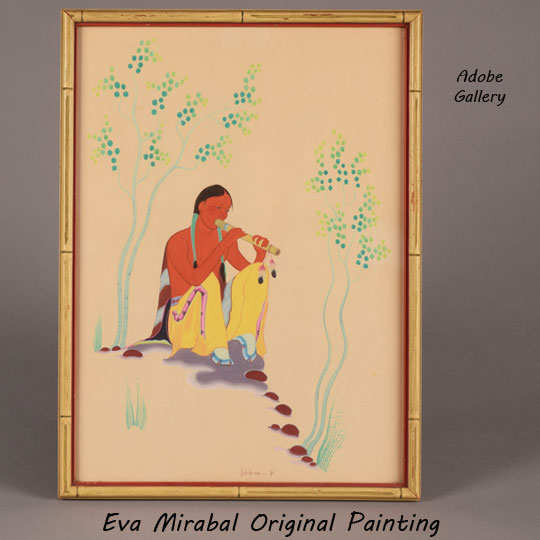 This wonderful original painting was created by Taos Pueblo artist Eva Mirabal.  Her subject here is a Native musician.  He sits by himself, playing his flute, enjoying the meditative nature of making music with no audience.  He looks down at his instrument, entranced by its effects.  Mirabel selected bold, opaque paints for the man’s skin and clothing, drawing the viewer to his position near the center of the image.

Elsewhere, Mirabal shifts into dreamier territory, creating natural features in colors that feel ever-so-slightly exaggerated beyond reality.  The trees are made of a wide palette of green tones, shifting from darker to lighter tones as the leaves extend away from the winding trunks.  The man sits on a soft purple form, which is surrounded by rocks in bold maroon.  This painting captures a moment that will be familiar to any creative person—the moment when one becomes so absorbed in their practice that the rest of the world begins to take on a magical glow.  Mirabal’s work with this piece is excellent.

The painting is signed Eah Ha Wa and dated ‘48.  It is framed under plexi in a colorful carved wood frame.

Eva Mirabal (1920-1968) Eah Ha Wa - Fast Growing Corn was a Taos Pueblo artist who studied at The Studio of the Santa Fe Indian School.  Mirabal began receiving attention as early as her teenage years and was chosen to show at a Chicago gallery in 1939.  In 1943, she joined the Army. After basic training, she was assigned a post as a muralist. While in the Army, she created a comic strip titled G.I. Gertie which was circulated in Women’s Army Corps publications.  After the war and a stint teaching at Southern Illinois Normal University, she returned to Taos to continue painting and studying art. Mirabal’s accomplishments—successful gallery exhibits, museum placements, and being the only woman included in the Philbrook Museum of Art’s 1946 First National Exhibition of Indian Painting—are even more impressive when one considers that she only lived to 49 years of age.

Provenance: this Eva Mirabal Original Taos Pueblo Painting of Native Flautist is from a private collection

- Silverman, Jason. "Drawing From Life: Spurred by the Taos Painters of the 1920s, Taos Pueblo's Eva Mirabal Painted Her Community as She Saw It - and Changed Southwest Art in the Process." Santa Fean (May 2002): 33-36.