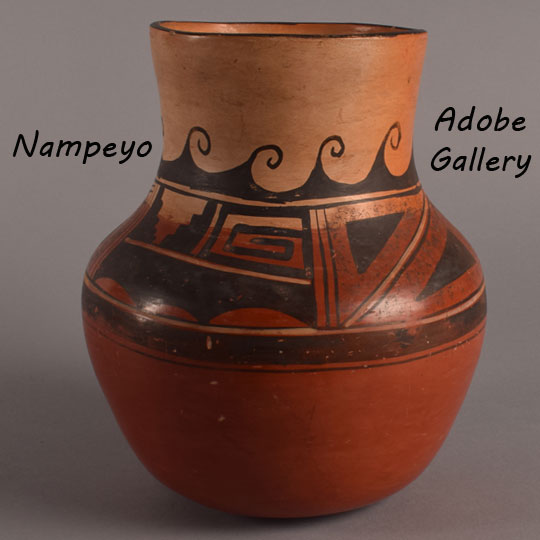 Nampeyo of Hano was a true artist who constantly experimented with vessel shapes, slips, and designs as if she was not interested in what might be of interest to a buyer, but what she herself wanted to try.  This duotone jar is certainly an experiment by Nampeyo with no known precedent. It was probably an experiment she tried around circa 1905, as the only published similar piece is one that was purchased by J. J. Mora at Hopi when he was there in 1904-1907.  The caption that accompanies the photograph of the Mora piece states, “Two other Nampeyo pots have been located that are slipped in this fashion.” [Blair,1999:VII]

Nampeyo put two different slips on this jar, dividing the jar from upper to lower.  Both slips are traditional on Hopi-Tewa pottery but not used in a similar manner by other potters.  The design chosen by Nampeyo is sparse, a design she chose so as not to overwhelm her choice of slips, but to allow the slips to predominate and the design to assist.

There is a band of geometric shapes around the shoulder of no determinate descriptions.  Around the lower neck of the vessel, she chose a continuous “wave” design.  A wide band encircles the jar at mid body.  The red slip of the lower section of the jar extends to the underside.  Above the wide dark brown mid-body band, Nampeyo spread the red slip over the previously painted design she applied in brown over yellow.  She chose only to put the red slip over a portion of the design, leaving the “wave” design uncovered.

This is a rare example of an early jar by Nampeyo, a jar with which she illustrated her desire to experiment with shapes, slips and designs.  It obviously was a period when she was free to do so as she wished rather than produce what was in demand.

“A study of numerous well-documented Nampeyo works reveals that the golden age of her exquisitely decorated work was between the years of 1895 and 1908.  Although she continued to produce outstanding pieces of art after 1908, her failing eyesight made it necessary to turn over more of her decorative work to family members.” [Blair, 1999:90]

Provenance: this Nampeyo of Hano Hopi-Tewa Pottery Jar with Dual Slips is from a private collection