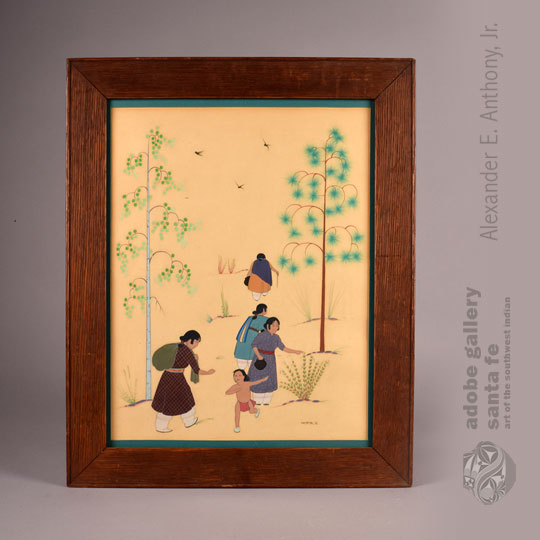 This watercolor painting of women picking berries was created by award winning early Taos Pueblo artist Eva Mirabal. The artist’s family members worked as models for notable Taos artists Nicolai Fechin and Joseph Imhoff. It has been suggested that Mirabal’s style—realistic, quiet, and grounded—might have developed as a response to the Anglo-made, romanticized depictions of her people.  Dorothy Dunn famously noted that Mirabal “had the ability to translate everyday events into scenes of warmth and semi-naturalist beauty.” With this image, the artist did exactly that. The painting is an enchanting ode to daily life at Taos Pueblo.

Mirabal’s subject here is a group of women picking berries.  Two of the women, backs turned toward the viewer, walk off into the distance.  Another woman faces the viewer, picking berries from a plant. In the foreground, another woman reaches a hand out, perhaps offering a berry to the passing child.  Mirabal’s figures are warm and alluring, their movements feel graceful, their traditional clothing is depicted with great care. The surrounding area is minimal but effective—the aforementioned plant feels significant despite its size, the two tall trees are gorgeous.  Three small birds decorate the sky above the women, hovering in the distance between the two trees. Short lines represent the earth in the areas from which plants emerge; no other details are included and none are necessary. The image succeeds on a very simple but incredibly significant level: it makes something difficult into something beautiful.

The painting is signed Eah Ha Wa and dated “42.”  It is framed under glass in a simple wood frame.

Eva Mirabal (1920-1969) Eah Ha Wa - Fast Growing Corn was a Taos Pueblo artist who studied under Dorothy Dunn at the Santa Fe Indian School.  Mirabal began receiving attention as early as her teenage years, and was chosen to show at a Chicago gallery in 1939.  In 1943, she joined the Army. After basic training, she was assigned a post as a muralist. While in the Army, she created a comic strip titled “G.I. Gertie” which was circulated in Women’s Army Corps Publications.  After the war and a stint teaching at Southern Illinois Normal University, she returned to Taos to continue painting and studying art.

Mirabal’s accomplishments—successful gallery exhibits, museum placements, and being the only woman included in the Philbrook Museum’s 1946 First National Exhibition of Indian Painting—are even more impressive when one considers that she only lived to 49 years of age.

Provenance: this Untitled Painting of Taos Pueblo Women Picking Berries by Eva Mirabal is from a private New Mexico collection