Untitled Navajo Painting of Round Dance by James Wayne Yazzie 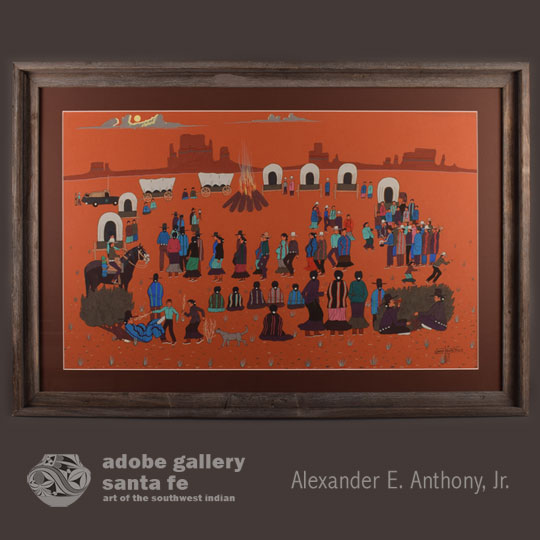 This large painting of a Navajo ceremony was created by Diné artist James Wayne Yazzie. We've only seen one other piece by this artist-a similarly-sized piece with a similar ceremonial theme. The difference, though, is significant-that previous listing used just a few colors, and this one is bold and colorful. A Diné friend of the gallery who knows these ceremonies very well provided us with a description of what's occurring in this painting: "The painting depicts the round dance of the enemy-way ceremony. The enemy-way ceremony is only conducted during the summer season. The 4-day ceremony treats a patient who is affected by the spirits of enemies with whom they come in contact, usually from war. At most times the ceremony emphasizes rites of going to battle. The ceremonial staff represents the scalp of a slain enemy, it contains the illness from the patient. During the round dance, a girl is often carrying the staff. It represents astaan' nadgleeh', praising her trophy scalp given to her by naayeenezghani and to'baadnichini'-her twin children who slayed the monsters."

Yazzie's round dance scene includes dozens of figures, as well as stagecoaches, horses, a police car, a fire, and a variety of plants. Its most immediately appealing characteristic is its coloration-a large palette of bold, bright tones painted onto paper that falls somewhere between red and orange. Yazzie's blues, greens and purples give the image a vibrant energy. Standing in strong contrast to these tones is the orange-red paper, which represents the arid but beautiful desert landscape. The aforementioned ceremony is, of course, the main event, but there's much more to see here. Children with sticks bother a sleeping man, two men share a drink behind a tall bush, a man is hauled off to a police cruiser-all of these details are wonderful. Yazzie painted a ceremonial scene, as Native artists do, but he managed to tastefully and effectively include some things we don't often see in works from this era. These details-all of the activity outside of the main event-give the viewer a more accurate look at the realities of life on the reservation. This painting is one of the most rare and exciting Native paintings we've handled recently. Yazzie, unfortunately, had a very short life. When looking at this piece, one wonders what he might have accomplished had he lived longer. This is a special piece that is overflowing with warmth, humor and humanity.

The painting is signed and dated “James Wayne Yazzie ‘67” in lower right. It is framed underneath brown matting in a wood frame.

James Wayne Yazzie (1943) was a "gifted and independent primitive" (Dunn 1968) who produced large arresting native scenes of the Navajo. Although self-taught, Yazzie used the Santa Fe Indian School Studio style in his art. Clara Lee Tanner's Southwest Indian Painting: A Changing Art provided a brief but complimentary bio about the artist: "James Wayne Yazzie, born in 1943, painted in water media and oils. Frequently there are many figures in a single painting. Frequently, too, there are touches of humor, such as a Navajo girl pulling a man out to dance with her, or where a woman in the foreground is pouring a dipper of water over a sleeping tribesman. Yazzie was killed in a train accident in 1969."

Condition: this Untitled Navajo Painting of Round Dance by James Wayne Yazzie is in  excellent condition