Original Painting of Fawn and Bird by Beatien Yazz [SOLD] 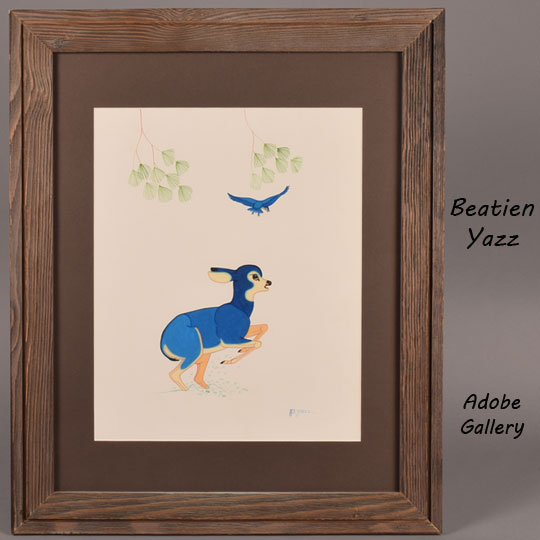 This original watercolor painting was created by Beatien Yazz.  It is a sweet image from an influential Diné artist of the Navajo Nation.  Its relative simplicity suggests that it might be an early-career piece.  His later images are rich in depth and detail, moving beyond the confines of the “flat” style by including the environments in which the artist’s primary subjects exist.   With this piece, though, simplicity works perfectly.

In the center of the image, we see a blue fawn.  Its ears are tucked behind its head as it hops along the snow-covered ground.  Up above, a single blue bird flies through the air.  Its wings are spread wide, somewhat dramatically, as it turns its head down toward the ground.  Two branches hang down from an otherwise invisible tree.  The two branches and the series of light blue marks signifying the snowy ground are the only hints as to the environment through which Yazz’ creatures travel.  The crisp white board onto which they are painted feels appropriate, given that they’re moving through winter conditions.  Most importantly, Yazz’ bold blue animals seem to be enjoying their snow day.

The painting is signed B. Yazz in the lower right.  It is framed under Plexiglas and an olive-colored mat in a carved wood frame.

Provenance: this Original Painting of Fawn and Bird by Beatien Yazz is from a private New Mexico collection