Ohkay Owingeh Painting of a Turtle Trio by P’otsúnú [SOLD] 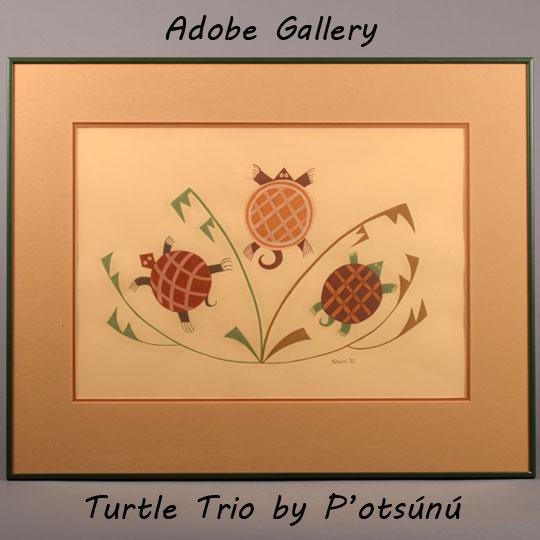 This original painting was created in 1982 by Gerónima Cruz Montoya, an artist and educator from Ohkay Owingeh Pueblo.  Montoya’s subject here is a trio of turtles.  They’re swimming outward in different directions from a common point just below the center of the image.  The turtles are nearly identical in shape and size, but subtle variations appear.  Their shells, most notably, feature unique patterns and color schemes.

Two pairs of long, winding lines emerge from the same point as the turtles, framing them in graceful plant designs, and perhaps guiding them on their way. The central turtle forges its own path directly toward the painting’s upper border.  This is a simple and tasteful composition that feels natural and well-balanced.  Montoya’s earthy color palette feels appropriate.  As always, her figures themselves are quite appealing.  This is a sweet and beautiful painting from a significant pueblo artist.

The painting is signed P’otsúnú and dated ‘82 in lower right.  It is framed in a thin green frame, under two layers of matting in complementary tan tones.

Gerónima Cruz Montoya (1915 – 2015) P’otsúnú – White Shell was a painter and educator from Ohkay Owingeh Pueblo.  Montoya attended the Santa Fe Indian School, where she studied under the tutelage of Dorothy Dunn. She would eventually succeed Dunn as the head of the Indian School’s art program. Like Dunn, and perhaps because of Dunn’s encouragement of her own development, Montoya taught students to paint the images with which they were familiar.  For these young Native Americans, that meant ceremonial dance scenes, mostly, as well as the occasional hunt or daily ritual image. Montoya’s influence was significant, and many of her young students went on to become successful artists.

Montoya also attended the University of New Mexico, Claremont College, and the University of Albuquerque.  Alfredo Martinez, Jean Ames, and Kenneth Chapman were some of her notable instructors. She was an excellent painter, of course, though her educational efforts occupied most of her time.  Clara Lee Tanner’s Southwest Indian Painting: A Changing Art describes Montoya as a “now and again” painter who was most active and successful during the 1960s. Tanner describes Montoya’s skillful dance figure portrayal and Mimbres animal imagery and praises the “simplicity but strength of line” that is characteristic of her work.  Montoya passed away in 2015.  She remains highly regarded for her efforts as both an artist and educator.

Provenance: this Ohkay Owingeh Painting of a Turtle Trio by P'otsúnú is from the collection of a gentleman from Texas