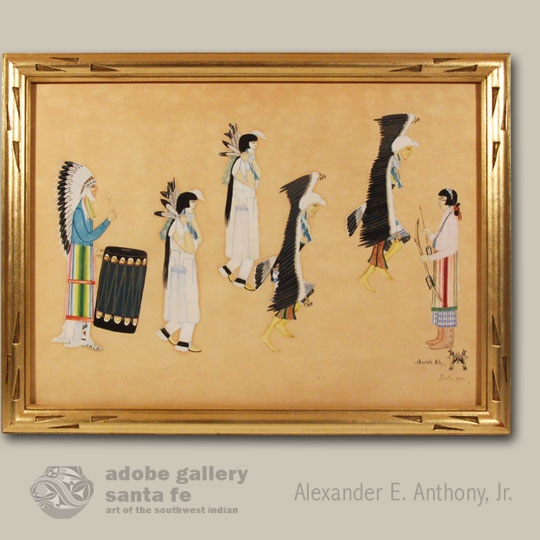 San Ildefonso Pueblo artist Tonita Peña is recognized as the first Pueblo Indian woman to make a living as a painter.  By the time she was 25 years old, she was a successful easel artist. Her work was being displayed in museum exhibitions and in commercial art galleries in Santa Fe and Albuquerque. She painted what she knew best—scenes of life at the pueblo.  She mostly painted ceremonial dances, and occasionally depicted everyday events. She did so with incredible skill and sensitivity. It is apparent in her works that she truly knew and respected each of the rituals she depicted. In the years since her passing she has come to be regarded as one of the greatest Indian artists of all time.  Her works are displayed in prominent public and private collections around the country.

Tonita Peña (1893-1949) Quah Ah was born in 1893 at the small New Mexico pueblo of San Ildefonso. The pueblo is located on the Rio Grande, just north of Santa Fe. When Peña was just twelve years old, her mother passed away. Her father, unable to raise her while tending to his responsibilities at the pueblo, took her to live with her aunt and uncle at Cochiti Pueblo.  This was where she would spend the remainder of her life. Tonita was the only woman in the group of talented early pueblo artists referred to as The San Ildefonso Self-Taught Group, which included such noted artists as Julian Martinez, Alfonso Roybal, Abel Sanchez, Crecencio Martinez, and Encarnación Peña.  These artists were the earliest known pueblo painters. Today, their works are highly collectible not just because of their historical significance but because of their quality. 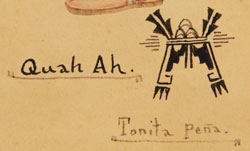 This untitled painting of an Eagle Dance ceremony feels a bit different than other similarly themed paintings by Tonita Peña.  It feels loose—not haphazard, but a bit more spontaneously executed than usual. This is no slight against the piece, as its eccentricity is one of its best qualities.  It features a six figure eagle dance grouping. Each figure was composed with admirably detailed lines. Two female dancers trail behind the Eagle Dancers.  Their bodies are made of white paint, over which blue outlines are painted.  We intitally interpreted the women's dresses as being unfinished, but we were corrected by a friend from San Ildefonso Pueblo.  He noted that for this particular occasion, the women dress all in white, with no embroidery on their mantas.  He showed us another one of Peña's Eagle Dance paintings, which featured a similar composition.

In the early 1930s, she began using small combinations of cloud, rain, and storm motifs—like the one seen in this painting’s lower right corner—in conjunction with her name or names, sometimes using the names with the motifs. These became more intricate and complicated in design as time went on.

Condition: this Original San Ildefonso Pueblo Painting of an Eagle Dance by Tonita Peña is in excellent condition

Provenance: from the collection of a New Mexico resident 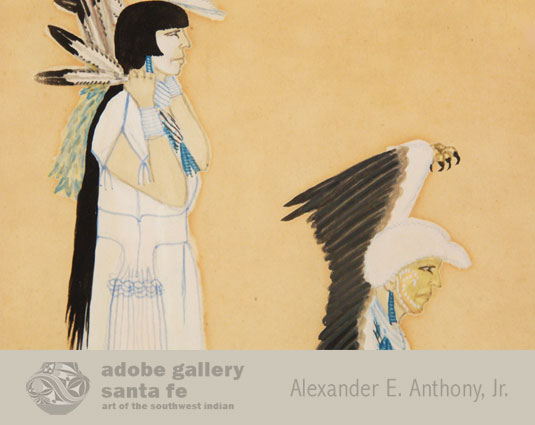