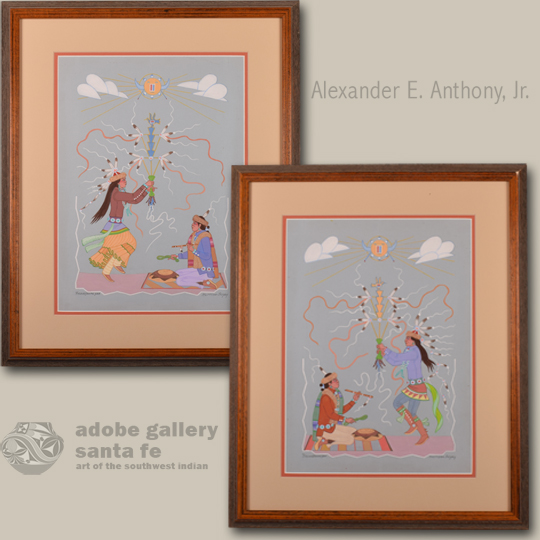 When researching this excellent pair of paintings by Diné painter Harrison Begay, it dawned on us that it would be best to have an expert describe the intricacies of the ceremony. We consulted with *a talented young Diné painter whose excellent work is influenced by Begay's. He graciously provided the following information: "These two paintings both depict the Feather Dance of the Mountain-way ceremony. The male and female dancers wear tripod-shaped otter pelt headdresses adorned with plumes, string, and red horsehair. The dancers hold in both hands a wand representing a certain direction-blue is south, yellow is west. The upside-down triangle pattern represents storm clouds carried by a sacred bird. A blue bird and a yellow warbler bird are painted with rainbow symbols carrying moisture. The wooden wands are decorated with eagle plumes, yarn strings, and ribbons. The chanters carry a whistle, or a flute used during the corral dance, as a sound of their approach for the spectators. The basket is used as a drum, and the drumsticks are made of yucca blades braided together. The dancers dance to the rhythm of the basket drum and rattle. The sun and clouds represent the participants' blessings they receive."

Harrison Begay (1917-2012) often created paintings like this, that were sold as pairs and intended to be hung together.  His subjects were usually dancers or Diné people and their horses or other animals. He’d arrange the images’ components in a similar but reversed fashion, creating a pleasant symmetry when the paintings hung next to each other.  Often, one painting would feature a male and the other would feature a female.

This magnificent pair of paintings fits that description but stands out from the many similarly arranged pairs because of its refined color palette and particularly strong composition.  Begay’s drummers kneel, wielding their yucca drumsticks and looking up towards the scene’s most striking feature: the dancers’ wands. The wands, held up into the center of each image by their carriers, begin in a cluster of triangular patterns before extending wildly in all directions via the yarn and ribbons mentioned above.  The shapes that the yarns and ribbon form are just similar enough in each image to maintain the feeling of symmetry established by the placement of the dancers and drummers. The sun and storm cloud designs, again very similar with subtle variations between each image, are lovely. Begay used a larger, more ambitious color palette here than that which is seen in his more common works.  This pair of paintings, which dates to the 1970s, is one of the very best examples of Harrison Begay’s symmetrical painting pairs that we have ever had the pleasure of handling.

Condition: very good condition with a few minor spots that appear to be inherent to the piece

Provenance: this Harrison Begay Pair of Paintings of Diné Feather Dancers is from the large collection of a New Mexico resident who purchased it in the 1970s while living in Gallup, NM