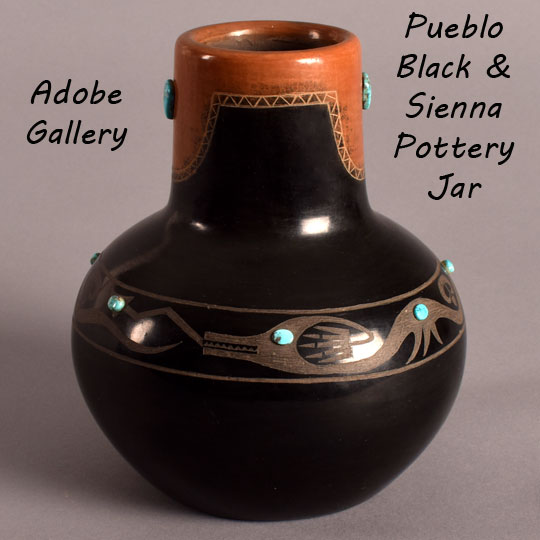 This lovely Pueblo pottery jar has a rounded body and tall neck.  An Avanyu water serpent encircles the body and is highlighted by turquoise gemstones at various places.  There are curved designs with down-pointing arrows at each point of the Avanyu where the body is lowest.  The tall neck is partially sienna in color with an inscribed band separating the sienna from the black.  There are two turquoise cabochons located in the sienna section.  The designs were inscribed after the jar was fired.

When we received this jar, we attempted to determine who the artist was, as it is signed, but with a name that we have not been able to identify.  It is signed with what appears to be Otima.  It is a well- constructed, designed, and executed jar, so our first thoughts were that it was a potter from San Ildefonso Pueblo.  We consulted with potter Russell Sanchez who came by the gallery and examined it.  He immediately said it was not a San Ildefonso artist, for the following reasons: he knows all the potters and their signatures and this is not one from there, and the Avanyu body is different from that used at San Ildefonso as there are three legs on the Avanyu, rather than two, and the legs are not parallel as they are presented at San Ildefonso.  He did acknowledge that Popovi Da sometimes gave his serpents three legs, but they were always parallel.  In this jar, they curve outward.  Russell acknowledged that the Avanyu head is similar to that used at San Ildefonso.  His thought was that it was possibly a potter from Santa Clara Pueblo.

A 1994 art appraisal by an Albuquerque appraiser stated the following: “San Ildefonso Style Jar, no signature.  In the mid 1960s, Popovi Da, Tony Da and Tse-Pe Gonzales participated in the development of Black-and-Sienna ware.  The appraiser has not been able to identify the symbol on the base of the jar, but feels that if Popovi or Tony Da had made the jar, their signature would appear on the jar.  Therefore I believe that Tse-Pe, the son of Rose Gonzales, made the vessel.”

I personally put more trust in the opinion given us by Russell Sanchez than the opinion of the appraiser, however I think presenting both opinions is the best policy.  The jar is accompanied by a sales ticket from The Kiva, a gallery on Don Gaspar in Santa Fe, dated 1974, an indication of when it was made.

Since we do not have definitive information about the potter or the pueblo, we are not making an attribution to either, but we are posting it with what information we do have.

Provenance: this Santa Clara Pueblo Black and Sienna Pottery Jar with Turquoise and Avanyu Designs is from the collection of a family from Albuquerque