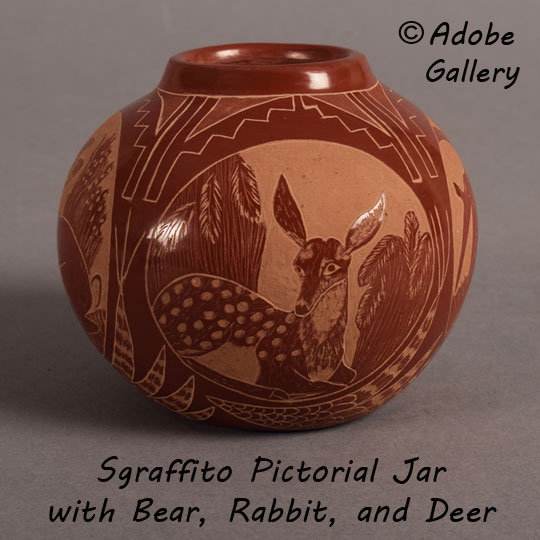 This miniature sgraffito carved red jar was created by Camilio Sunflower Tafoya of Santa Clara Pueblo. It is dated 1974. Its small globular form might suggest a miniature version of a Tewa storage jar, complete with the upturned rim that often appears on those significantly larger functional vessels.

Camilio used the sgraffito technique to create four circular images around the jar's exterior. Each circle is a window into the forest, with animals appearing in fine detail. A bear, a rabbit, two deer, and a fawn appear within these designs, providing the viewer with much to admire from any angle. An elegant design pattern appears outside of the circles, incorporating wings, feathers, kiva steps, and lightning designs. Camilio's work with this piece is excellent.

The bottom of the jar is signed Camilio Sunflower Tafoya, Santa Clara Pueblo, 1974 459.

Santa Clara Pueblo artist Camilio Sunflower Tafoya (1902-1995) made traditional black carved pottery in the mid-twentieth century. After his son Joseph Lonewolf popularized the intricate sgraffito carving style, Camilio picked it up too. Camilio also made tall pottery jars. Initially, he and his daughter Grace Medicine Flower worked together and co-signed pieces. Later, he worked alone. Camilio was the son of Sara Fina and Geronimo Tafoya, and brother of Margaret Tafoya, which places him within one of the most significant families in the world of Native art.

Provenance: this Santa Clara Pueblo Sgraffito Pictorial Jar with Bear, Rabbit, and Deer is from a private Santa Fe collection