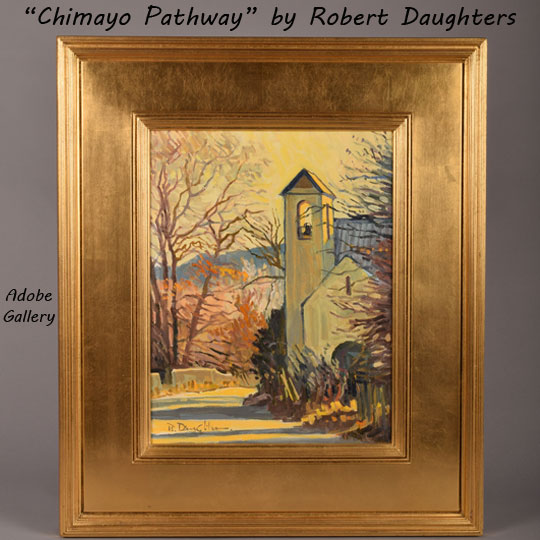 “Chimayo Pathway” is an original oil painting by celebrated Western artist Robert Daughters.  The artist’s subject is a church located in Chimayo, New Mexico.  One might read “Chimayo” and “church” and arrive at the assumption that this is the famous El Santuario de Chimayo.  That would be incorrect, however, as this is actually another church located in the same small town as the aforementioned historic landmark.  We’ve seen Daughters depict the El Santuario de Chimayo in another piece, which leads us to believe that he spent a great deal of time in Chimayo.

Daughters’ off-the-beaten-path church sits, bathed in soft evening light, on a quiet road.  Its tall bell tower points toward a clear sky.  Its front door is partially visible behind a thick wall of colorful brush. The sun sets, far out of frame to the viewer’s right, causing the church and trees to cast long shadows across the road.  Daughters’ color palette relies heavily on blue, orange, and soft purple tones, adding a bit of energy to the image while managing to preserve its inherent serenity.  The setting sun sends a warm wave of yellow onto the church’s walls and into the otherwise white sky, giving the image an inviting glow that will be familiar to anyone who has spent time in the region.  “Chimayo Pathway” is another excellent offering from Robert Daughters.

The painting is signed R. Daughters in lower left.  It is framed in a carved gold frame.

Provenance: this Original Painting titled "Chimayo Pathway" by Robert Daughters is from a private collection