Albuquerque was founded in 1706 as the Spanish colonial outpost of Ranchos de Alburquerque. Present-day Albuquerque retains much of its historical Spanish cultural heritage.

Albuquerque was a farming community and strategically located military outpost along the Camino Real. The town was also the sheep-herding center of the West. Spain established a presidio (military garrison) in Albuquerque in 1706. After 1821, Mexico also had a military garrison there. The town of Alburquerque was built in the traditional Spanish village pattern: a central plaza surrounded by government buildings, homes, and a church. This central plaza area has been preserved and is open to the public as a museum, cultural area, and center of commerce. It is referred to as "Old Town Albuquerque" or simply "Old Town." Historically it was sometimes referred to as "La Placita" (little plaza in Spanish). On the north side of Old Town Plaze is San Felipe de Neri Church. Built in 1793, it is one of the oldest surviving buildings in the city.

After the American occupation of New Mexico, Albuquerque had a federal garrison and quartermaster depot, the Post of Albuquerque, from 1846 to 1867. During the Civil WarAlbuquerque was occupied in February 1862 by Confederate troops under General Henry Hopkins Sibley, who soon afterward advanced with his main body into northern New Mexico. During his retreat from Union troops into Texas he made a stand on April 8, 1862, at Albuquerque and fought the Battle of Albuquerque against a detachment of Union soldiers commanded by Colonel Edward R. S. Canby. This daylong engagement at long range led to few casualties.

When the Atchison, Topeka and Santa Fe Railroad arrived in 1880, it bypassed the Plaza, locating the passenger depot and railyards about 2 miles (3 km) east in what quickly became known as New Albuquerque or New Town. Many Anglo merchants, mountain men, and settlers slowly filtered into Albuquerque creating a major mercantile commercial center which is now Downtown Albuquerque. Due to a rising rate of violent crime, gunman Milt Yarberry was appointed the town's first marshal that year. New Albuquerque was incorporated as a town in 1885, with Henry N. Jaffa its first mayor, and it was incorporated as a city in 1891. Old Town remained a separate community until the 1920s when it was absorbed by the city of Albuquerque. Old Albuquerque High School, the city's first public high school, was established in 1879. 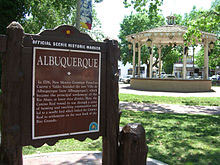 By 1900, Albuquerque boasted a population of 8,000 inhabitants and all the modern amenities, including an electric street railway connecting Old Town, New Town, and the recently established University of New Mexico campus on the East Mesa. In 1902, the famous Alvarado Hotel was built adjacent to the new passenger depot, and it remained a symbol of the city until it was razed in 1970 to make room for a parking lot. In 2002, the Alvarado Transportation Center was built on the site in a manner resembling the old landmark. The large metro station functions as the downtown headquarters for the city's transit department. It also serves as an intermodal hub for local buses,Greyhound buses, Amtrak passenger trains, and the Rail Runner commuter rail line.
New Mexico's dry climate brought many tuberculosis patients to the city in search of a cure during the early 20th century, and several sanitaria sprang up on the West Mesa to serve them. Presbyterian Hospital and St. Joseph Hospital, two of the largest hospitals in the Southwest, had their beginnings during this period. Influential New Deal-era governor Clyde Tingley and famed Southwestern architect John Gaw Meem were among those brought to New Mexico by tuberculosis.

According to the United States Census Bureau, Albuquerque has a total area of 181.3 square miles (470 km2).180.6 square miles (468 km2) of it is land and 0.6 square miles (1.6 km2) of it (0.35%) is water.
Albuquerque lies within the northern, upper edges of the Chihuahuan Desert ecoregion, based on long-term patterns of climate, associations of plants and wildlife, and landforms, including drainage patterns. Located in central New Mexico, the city also has noticeable influences from the adjacent Colorado Plateau Semi-Desert, Arizona-New Mexico Mountains, and Southwest Plateaus and Plains Steppe ecoregions, depending on where one is located. Its main geographic connection lies with southern New Mexico, while culturally, Albuquerque is a crossroads of most of New Mexico.

Albuquerque has one of the highest elevations of any major city in the United States, though the effects of this are greatly tempered by its southwesterly continental position. The elevation of the city ranges from 4,900 feet (1,490 m) above sea level near the Rio Grande (in the Valley) to over 6,700 feet (1,950 m) in the foothill areas of Sandia Heights and Glenwood Hills. At the airport, the elevation is 5,352 feet (1,631 m) above sea level.

The Rio Grande is classified, like the Nile, as an "exotic" river because it flows through a desert. The New Mexico portion of the Rio Grande lies within the Rio Grande Rift Valley, bordered by a system of faults, including those that lifted up the adjacent Sandia and Manzano Mountains, while lowering the area where the life-sustaining Rio Grande now flows.

Albuquerque has an arid climate (BSk, depending on the particular scheme of the Köppen climate classification system one uses), with mild winters, and hot summers. Albuquerque is in the northern tip of the Chihuahuan Desert, near the edge of the Colorado Plateau.[19][20]The average annual precipitation is less than half of evaporation, and no month averages below freezing.

Albuquerque's climate is usually sunny and dry, with low relative humidity, with an average of 3,420 sunshine hours per year. Brilliant sunshine defines the region, averaging 278 days a year; periods of variably mid and high-level cloudiness temper the sun at other times. Extended cloudiness is rare. The city has four distinct seasons, but the heat and cold are mild compared to the extremes that occur more commonly in other parts of the country.
Winters are rather brief; daytime highs in December and January average in the mid-40s to lower 50s Fahrenheit, while the overnight lows drop into the 20s and 30s.

Spring is windy and warm, sometimes unsettled with some rain, though spring is usually the driest part of the year in Albuquerque. March and April tend to see many days with the wind blowing at 20 to 30 mph (32 to 48 km/h), and afternoon gusts can produce periods of blowing sand and dust. In May, the winds tend to subside, as temperatures start to feel like summer.

Summer daytime highs are usually in the 90s, while dropping into the 60s to 70s overnight. The heat is quite tolerable because of low humidity, except during the late summer during increased humidity from surges in the monsoonal pattern; at that time, daytime highs drop slightly but the extra moisture in the air can cause nighttime temperatures to increase.