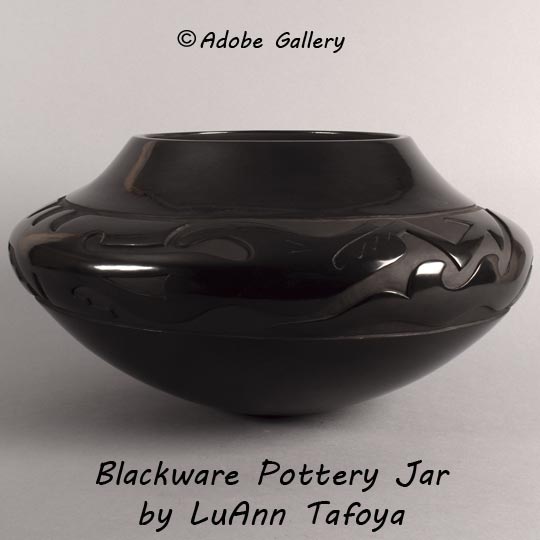 This enormous jar was created by LuAnn Tafoya, a Santa Clara Pueblo potter who comes from what many would consider to be one of the most significant families in the world of Native art. LuAnn continues the tradition practiced by her mother Margaret and her grandmother Sara Fina, creating fine polished blackware and redware with carved or impressed design elements. Some of LuAnn’s works look toward the future, using subtle contemporary touches and highly refined carving. Others stick closely to tradition by using ancestral designs. The common thread is that they’re all incredibly well-crafted vessels that were made using traditional methods and materials.

This jar is the most extraordinary piece Adobe Gallery has seen emerge from LuAnn Tafoya’s fire. At 19 inches in diameter, it is a massive piece, which anyone familiar with the process will recognize is impressive. This jar, in fact, was completed after three similar pieces were attempted unsuccessfully. The three previous attempts cracked during firing—a common problem which, unfortunately, becomes more hazardous as the artists scale up their work. Adobe Gallery considers itself very fortunate to have acquired this exceptional jar.

LuAnn Tafoya used a single carved design band, which is centered around the vessel’s widest point. A fantastic execution of the Avanyu water serpent appears within this band, making its presence known through both its appealing character and the sheer size of the presentation. Those with an eye for traditional symbolic elements might see rain clouds, kiva steps, lightning patterns and vertical rainstorm lines carved into the Avanyu’s slender form. Those who are unfamiliar with these symbols will find an elegant blend of abstracted designs coming together harmoniously to form a larger figure. There is depth to this composition; it can be appreciated equally by Native art enthusiasts and those without knowledge of these images’ origins. LuAnn Tafoya’s designs are inventive and appealing, her carving is flawless, and her work with the polished surface is excellent. The vessel itself is both a remarkable technical achievement and an undeniably attractive variation of a traditional Pueblo form. This is a special piece that deserves the consideration of those who collect the finest contemporary pottery.

The bottom of the pot is signed LuAnn Tafoya, Santa Clara NM. Interestingly, she appears to have signed twice, with one signature falling loosely over the other.

LuAnn Tafoya (1938- ) is a talented Santa Clara Pueblo potter. LuAnn comes from the Tafoya family of Santa Clara Pueblo in New Mexico. Sara Fina Tafoya was a masterful potter as was her daughter Margaret Tafoya and some of her siblings. Margaret, in turn, passed on this artistic gene to nine children and numerous grandchildren.  LuAnn Tafoya, a daughter of Margaret Tafoya, certainly inherited the talent to produce beautifully sculpted jars with highly burnished surfaces. She has received many notable awards and a great deal of recognition for her efforts, including “Best of Show” and “Best of Pottery” at Santa Fe Indian Market.

Provenance: this Enormous Carved Blackware Pottery Jar by LuAnn Tafoya was purchased directly from the artist in 2015